With previous experience with the Arts Biennale in Venice, expectancies are huge, especially in the eyes and mouth wide opened section, but also in the areas of posing, cool and trendy topics, with a bit of intellectual snobbism, searching a little bit above our every day level and occupations.

I’m expecting not just an exhibition, but some exposure as well. A show off to which I’m the astonished spectator.

The parade is even more interesting since the exhibitors are exposed, put to the wall all together, they must prove themselves to the competition, to their own and to the preconceptions and the realities brought to the table by the co-exhibitors.

The ones chosen to tell the world something important at each edition are called curators. Quite a hit this year: Alejandro Aravena, beautiful, socially aware and empathetic architect from Chile.

After several different project ideas, he presented “Reporting from the Front” – getting together in the central exhibitions of the Biennale a solid selection of responses to crisis situations or even solutions to social, living and life crises.

There was a lot to learn from this Biennale which, nevertheless, left no aesthetic impact on the visitor’s mind.

I have no statistical idea about the most common type of construction at this moment, around the world – I may assume that it’s about access infrastructure, mainly roads, bridges, transport. But Aravena’s exhibition tells a different story: we build small, the “downshifting” life style which paradoxically reduces the efforts but increases the quality of life is shifting down the architecture as well.

But it’s not about bored hipsters, tired of the big city life, the long commute hours to pay the mortgage and the bio food, dreaming of retiring in a village away from the national road but connected to the internet, where they could grow tomatoes in the garden and not in a jar on the balcony.

It’s about the poor regions of the world in Africa, Asia, South-America and impoverished Europe (there is no poverty-free place in this world!) where the resources of the institute-like architecture are scarce.

The downshifting in the exhibition is first of all present in the return to traditional materials and vernacular building techniques, in the use of nearby raw materials and nearby unqualified but cheap and willing workforce, in the need of overcoming the sub-human living conditions.

Secondly, there is a contraction of the living space and a reduction of the urban space or, best case scenario, an adaptation to the existing available space in the over-populated areas (Japan and South Korea are making a point of it in their national pavilions).

The re-use, re-qualification of buildings that used to have different destinations or shapes and the re-use of unfinished constructions or ruins were also an ideological and de facto direction of the exhibition (with Spain, the 2016 trophy winner, being the best illustrator of this orientation).

Another favourite topic was the shared public and private space: public squares for the local communities, aiming even to shape a community that would be able to communicate, to share and to function better than it does now; no personal houses but shared homes instead, that would include both private and common spaces; flexible and temporary spaces, not attached to individuals; spaces to integrate foreigners and migrants (some of them integrating migrants into residents’ apartments).

The compact city as the sole efficient solution, both economically and from the quality of life and living perspective, was the conclusion of the special exhibition Report from Cities: Conflicts of an Urban Age (part of the British-German programme Urban Age) and we cannot conclude otherwise.

What we liked best: Alejandro Aravena’s generous intentions. We liked Report from Cities: Conflicts of an Urban Age because it showed different types of metropolis along with significant amounts of data relevant for these cities development in the last 20 years; Mexico’s national pavilion because it taught how to build your own house in the country and because it showcased many different handbooks on the subject, incredibly smart and well put together; Russia’s exhibition for being great, spectacular and teleporting to the glorious past of the Soviet Union (plus, we finally found out who made the famous „конец  фильмa” sculpture that was the brand of Mosfilm – it was Vera Mukhina); the blue in the “Blue” Dutch exhibition that taught us about how a UN military base appears, settles in and evolves; the Nordic Countries pavilion for they had pretty Méridienne (!) chaises-longues and a thousand and one leaflets each of them presenting in words and image a separate building; Israel for mirroring architecture with biology in a pragmatic, inspired and relevant approach; we remember the rolling yowling in the Albanian space – 10 UNESCO Intangible Heritage songs performed a cappella; we loved the Singapore pavilion of magic glass lanterns enclosing miniature worlds (photographs of apartment rooms and their inhabitants) and the meaty painted chairs in the South-Africa’s hall. 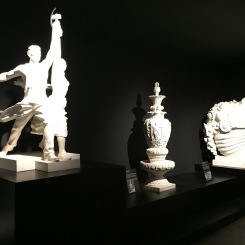 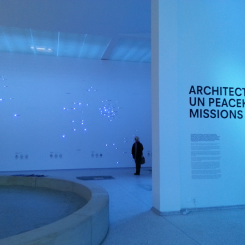 What we disliked most: we were bored and tripped up by the British exhibition which was duller than the English rain; Germany seemed to be making good savings by sticking some welcome posters on the walls not in the best looking way; the Austrian affable and condescending migrant-focused compilation.

Annoying: the lack of readable information in the Romanian pavilion, for the hermetic, appealing, interactive but non-architectural Selfie Automaton installation. Happily for us, we had home knowledge on the metaphorical transformation of the House of the Parliament (still the largest building in Europe, an inheritance of the communist era) into the neighbouring National Cathedral (a big scale under-construction project gathering the local Orthodox Church’s ambitions, political interests, huge public funds and bad urban planning), so we could read a little between the lines.

Funny: the”politically correct” and intrusive dialogue written on the Polish wall by visitors, in pencil and feminist and gender equality clichés.

Conclusions: yes, uncontrolled urban expansion must be stopped and corrected; yes, outskirts built by corporations out of the city and out of the public transport infrastructure should not exist; yes, spending your life on the road, depending on your car along with your children is foolish.

And yes, Venice is exceptional and so is its Biennale (any Biennale) which is worth seeing at least once in a lifetime.

Photographs taken in the exhibitions by ©Museum Anonymous